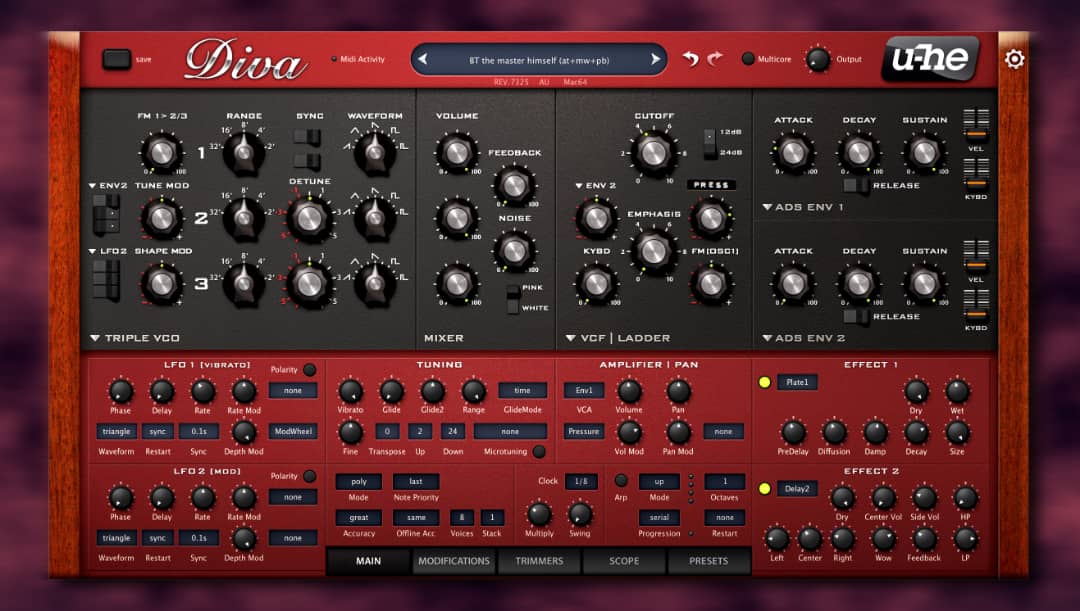 Boiling down the 10 synths that shaped the sound of dance music is a tall order, but it’s a challenge we’re prepared to undertake! Here’s a guide to those beasts that defined the last few decades…

By Andy Jones – 15th July 2019
Orbital incorporate a wide variety of synths into their live rig, with the Bass Station (and its successor) providing one of their go-to sounds
Orbital with Novation’s Bass Station. Image: Hayley Madden / Redferns via Getty Images
How brave are we to try and pick just 10 synths that defined dance music from all the synths ever created, in both hardware or software? The fact is, though, that there have been some truly iconic synths released over the last 40 years of dance music that really have defined its history. Some might simply have contributed to the success of certain genres, while others might have created genres but, whatever the impact, the following machines really have undoubtedly made dance history.

We’re dividing the 10 – actually 12, and we’ll come to that – up into five classic hardware machines and five (almost) classic software synths, some of the latter of which have already been with us for a decade or more, and are still available! Also, this is very much the follow-up to our 10 synths that made synth-pop feature where we covered earlier classic analogs, including Moogs, ARPs, Korgs, and Yamahas. You could, of course, argue that those influenced dance music via synth-pop, but we think they’ve had their moment in the sun in that feature, so they don’t appear here.

So, here are the 10 synths that defined dance music and the hundreds of sub-genres within it…

We’ll start with the classic dance synth; indeed, how could we not include this icon of acid? The TB-303 was not actually marketed as a synth: it was classed as more of a ‘bass machine’ when it was launched in 1981. In fact, the ‘TB’ part stands for ‘Transistorised Bass’, as it was originally designed as an easy bass accompaniment for guitarists; not many wanted it, though, and it was discontinued in 1984.

However, producers would pick up cheap second-hand, unwanted 303s in the 80s and utilize the sequencer, slide and accent features to produce that now-famous squelchy and slippery sound. It was the perfect accompaniment, not to guitarists, but the repetitive beats from sister products such as the Roland TR-808 and 909 drum machines – which combined to make the kinds of highs and lows that gave the burgeoning numbers of listeners of techno, house and acid house their highs. The likes of Hardfloor, Marshall Jefferson, Josh Wink, and Aphex Twin spread the word from Chicago and Detroit to Ibiza via New York, London, and Sheffield… and dance music, as we know it, was born.

CURRENT PRICE An original in good nick with the cost you around £2,000. Don’t do it, though; there are plenty of clones.

NEW VERSION Loads! Roland has released dozens of 303-a-likes over the years, never quite reissuing the original hardware (and you can get a great software version on the Roland Cloud). The best version is the Roland TB-03, which can be picked up for just £315.

Some synths have helped make genres popular, while some genres have made synths popular and we’d put the virtual analog JP-8000 in the latter category. In so many trance forums today, you’ll still find many producers recommending the JP-8000 (and the slightly better-featured JP-8080 rack) to wannabe trance-makers. This is largely down to its mighty supersaw, where up to seven core sawtooth waveforms were detuned against one another. It’s relatively easy to recreate and several other manufacturers have taken up the sawtooth baton since the JP was discontinued in 2001, but, as we say, the original is still held in high regard as it gave birth to one sound that defined a genre.

NEW VERSION Most modern polysynths will offer supersaw-like trance sounds so take your pick. Our current recommendations for hardware synths for dance (although not all supersaw) include the Arturia MicroFreak, IKM UNO, Korg Mono/Minilogue (or Volcas), Modal Skulpt, Pioneer Toraiz AS-1, Roland Boutique range or anything by Teenage Engineering. Like we said – a lot! 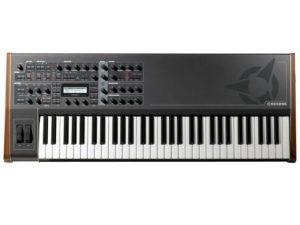 You could easily argue that the Access Virus range – and we will include the range this time, as they are all well regarded – is just another synth that does trance well. However, when it was released back in 1997, soon followed by various updated and replacements, it soon became clear that this was a ‘best of’ of all the synths that came before – so it became one of the most sought-after synths, not just in dance but many other genres. However, the lush pads, rounded basses, hands-on tweaking and beautifully crafted presets (and yes, many did use them) won it fans with many of the dance community’s biggest names. Trance? Yes, but also so much more.

CURRENT PRICE There’s some debate over whether the Virus can still be bought new – the website is not up as we write this, but various dealers are selling new and used models from £2k downwards, some prices reduced, so perhaps now is the time to buy.

NEW VERSION Some will tell you that the sound of the Virus has been superseded by modern synths from DSI/Sequential, Roland et al, but we’d say different. Perhaps it’s time to get one of the few new ones on offer, or for more of the many new bespoke synth companies out there to recreate it. 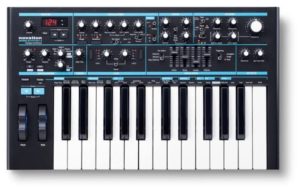 Controversy time! In the early-to-mid 90s, the very founding ethos of dance music was under threat: to make music on Roland gear, because it was cheap. With Roland refusing to reissue it – and only 10,000 303s ever made – prices of the original gear soared, so those 90s producers were screaming out for something that screamed. Eventually (and it took them some time – trust us, we were there), third-party hardware manufacturers got the message. Nowadays, of course, dozens of smaller producers have 303 clones – more on these another time! Novation was one of the most successful, with the dual-oscillator Bass Station synth. With extra features such as real-time MIDI transmission, tweaks could be made so it played and recalled the 303 sound well enough for a few hundred thousand units to be sold. How Roland must have kicked its 1993 self.

CURRENT PRICE Less than £100 for the original keyboard; £200 plus for the more featured rack.

NEW VERSION There was actually a pretty decent clone of the Bass Station out in software but, honestly, you’d be better off picking up the much better-endowed Bass Station II for a mere £325.

The final hardware entry is actually a trio of synths that appeared in the mid-to-late 80s, just as dance music was really starting to find its feet. Their influence on dance music was twofold: they sold gazillions between them and they delivered sounds that dance producers either loved or loathed – an influence, whichever way you look at it. We talk, of course, about the Yamaha DX7, Roland D-50 and Korg M1. This was the ultimate three-way synth setup for old-skool keyboard legends and session players in the late 80s and early 90s, but also gave dance producers access to a huge range of quality sounds to layer over their analogue bubbles.

Remember all those club dance tracks with piano leads? They were Roland D-50, DX7 and (mostly) M1 presets, the latter pretty much owning house-music leads in the 90s and delivering an affordable workstation so you could produce complete tracks from one synth. So, while not one of the three really deserves a single place in our countdown, this trio of digital ‘synthstations’ really does merit inclusion.

NEW VERSIONS Each company has kept the character and sound of these famous synths going in vast ranges of products, from software (Korg’s Legacy Collection and iM1 app and Roland’s Cloud), to re-imaginings (Roland’s Boutique D-05 and Yamaha’s Reface DX). You’ll also find many of the sounds and functionality in the huge workstations from each company (Yamaha’s Montage being a particularly good example of DX updating).

And in software…
Let’s not forget that the world of software has given us some classic dance-music synths. Here are five that rock the floor… 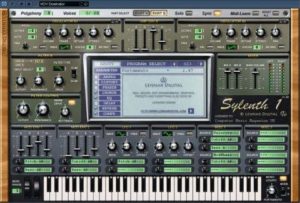 It’s incredible that Sylenth1 is a dozen years old and still going strong – you’d hardly get that in the world of hardware, let alone the fast world of software. But that’s testimony to the synth’s power, sound, features and ease of use. Dial through the presets and you’ll have a dance track going in minutes (although, with that history, someone else has probably done it already). 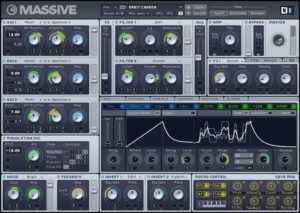 Massive was one of the synths that helped define many a dance genre when it was released well over a decade ago. With powerful hands-on features and incredible sounds, it has added wobbles, screams, glitches and searing to anything and everything. Its long-awaited bigger brother, Massive X (not a successor, according to NI), has just been announced. 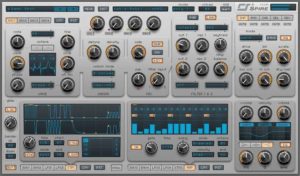 There are so many top producers who recommend Spire and, with a list of features that includes four multi-mode oscillators, a huge unison engine, character filters, massive modulation and built-in effects and arpeggiator, it’s easy to see why. They’ll be talking about this one in 20 years… 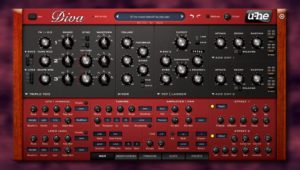 Described by some as the truest analogue-digital synth out there, Diva adds a wealth of features into the mix – and simply doesn’t mind admitting that it’s borrowed the best bits from synth history – to make it arguably the best all-round synth for dance.

10) Xfer Records Serum
(Photo)
Stroll through any dance-music forum to find out what producers are using – which we do, a lot – and you’ll see this crop up time and again. Serum has now become a modern synth classic, thanks to its wavetable structure and ability to create and synthesise as fast and deep as you like.

How to Give a Great Speech